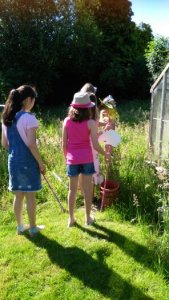 “I can’t believe we’re in double digits” was the phrase that one of my daughter’s friends put in her birthday card and it really made me smile and reflect at the same time! Can it really be 10 years ago that I had the whirlwind of emotions welcoming my little daughter into the world weighing just 3 pounds 14 ounces!

It felt like we had a whole week of celebrations as she had a joint birthday party with one of her new school friends at Go Ape in Delamere forest and she loved every minute of it and it was great to see what lovely friendships had been made in just 1 school year.   Thankfully Tim volunteered to be the escorting adult on the tree climb while I was left to sort out the food with the help of all the lovely parents.  We hired the wooden gazebo which had long tables and a giant connect 4 which was good and after they’d all eaten the girls all decided to do a bit of exploring in the woods before it was time to head home. It was really hot that day so being in the gazebo was perfect as it kept us all nice and cool.

We then had a party at home for her old school friends and it was lovely to see how even though they don’t see each other much anymore they all still absolutely love each other.  A unicorn theme was chosen and after scouring all the supermarkets and realising I’d run out of time to get one professionally made I opted for a DIY cheats cake buy buying a delicious piñata cake from Asda and then using an ice cream cone covered in icing to make the Unicorn theme.  Needless to say it was eaten in a quarter of the time it took to decorate it.

I also decided to use the old gardening sticks that had been left in my greenhouse to make unicorn hobby horses which were great until the little boys decided to try and use them as swords.  The sun was shining so the paddling pool came out and fun was had by all.