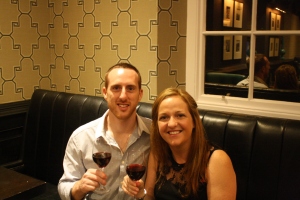 Dispelling all the myths, Friday 13th August 2004 was the luckiest day of my life as I married my best friend and soul mate Tim at the prestigious Mottram Hall Hotel in Prestbury. I will always remember the opening line of Tim’s speech when he said “if this is unlucky I say open all the umbrellas and smash all the mirrors” so I’m guessing he feels the same.

Our wedding day at the Mottram Hall was a whirlwind of enthralling emotions from beginning to end. Seeing all our friends and family in one room and having two minute conversations and two sips of champagne with each of them is something I will never forget. The drive down the long tree lined path seems like yesterday, yet surprisingly it was 10 years ago and I still can’t work out where the time has gone. I remember the staff were only too happy to help and scurried around behind the scenes making sure the day ran ever so smoothly. The red carpet treatment was something I knew I could get used to.

A lot has happened over the past 10 years, most notably the arrival of our two beautiful children, Freya aged 7 and Rory aged 3 and not forgetting the three job changes and three house moves. Surely that’s enough activity to spread over twenty years.

Returning to the Mottram Hall Hotel was like returning home, as although a lot has changed, including the welcome arrival of ghd’s in the changing room, there is still the same warm atmosphere that greeted us back in 2004.

A decade later, it was just as breath-taking driving down the windy lanes in Prestbury, although I have to admit, our family sized Ford Focus GHIA doesn’t even remotely compare to the open top cream Rolls Royce that we travelled in on our wedding day. However, it really didn’t matter whether we were in a Rolls Royce or a go-kart as we were both completely overwhelmed when we were faced with the Georgian, Downton Abbey esq building that seemed even more beautiful. The added bonus of our nostalgia trip was that this time around there were no nerves about the speeches or singing endless love in front of 160 people. Having singing lessons and blasting out Lionel Ritchie and Diana Ross seemed like a great idea at the time and we did receive a standing ovation even if they were all biased.

When we walked through the doors ten years later we were instantly greeted by the porter and the smiley receptionist which is always a good sign. I was so impressed that the new décor was still in keeping with the traditional exterior. If that wasn’t enough we were then personally escorted to the gorgeous Spencer Suite which overlooked the 280 acres of breath-taking Cheshire parkland.

Donning our bathrobes and slippers we headed over to the indoor spa with eager anticipation to see what changes had been made. As I mentioned, the line of ghd’s in the women’s changing room was a very welcome sight as I knew after spending a few hours in the spa they would quickly become my new best friend and tame my frizzy locks. I was very impressed with the new Alfresco Thermospace which is like an inside-out spa as I’ve decided to coin it and is something I’ve never experienced before. There is the outdoor Jacuzzi which is complemented by two wooden baths as they are called although to me they felt like large saunas although pleasantly not as hot. The added benefit of them both was that they had huge glass windows so although you were sat inside you really did feel like you had the best of both worlds sitting in the heat and looking out into the hills. The alpine smells also really added to the experience and gave the impression that we had been transported to the Alpine regions of Europe and if you stepped outside you would be greeted by yodellers and mountain cows.

The relaxing day was followed by a delicious meal at The Mottram Hall’s restaurant “The Carrington Grill” where we both enjoyed a delicious three course meal and a Mojito in the Cocktail bar.

They say that you should never go back to the same place as you’ll be disappointed and it was something we both thought long and hard about before booking but one thing this trip has certainly done is prove that the old proverbs do not always ring true. The Mottram Hall is definitely a destination I will be returning to again and again and Friday 13th is a day that I will be holding my head up high, ready to walk under ladders and watch with a smile as the black cat crosses my path.