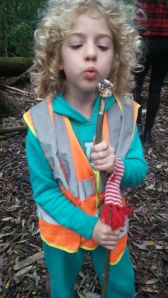 We all had a fantastic time at my 7 year old niece Kate’s birthday party over the weekend.  It really goes to show that there’s a lot more to life  than soft play centres although I do like them too especially when it’s awful weather!   We all were told to meet in Woodheys park in Sale and follow the signs into the forest which my two absolutely loved.  We raced into the forest and were met by a big awning and two men in bright orange tshirts and lots of other children eager to start the adventure.  One of the men in the orange t-shirt was chopping a thin log of wood so that each of the children could make their own name badge and then the drilled holes in the logs to make name bag neclaces which went down so well with the children and parents. It was non stop fun and games for the whole two hours.  After building dens, playing hide and seek and toasting marshmallows on an open fire we were all in need of some sandwiches and of course birthday cake.  The birthday girl had a smile on her face for the whole time as did Freya and Rory.   It was funny to see the adults enjoying the party just as much as the children and its definitely something we would all like to do again.

The company who ran it are called “We are Adventurers” which I thought was an apt name as even though I was just in a park not far from Manchester city centre as I was dashing around taking pictures and looking for twigs for the fire I felt like I was in the amazon rainforest!

So thanks to Kate for a fab party and thanks to We are adventurers – a fun day had by all!  http://weareadventurers.co.uk/