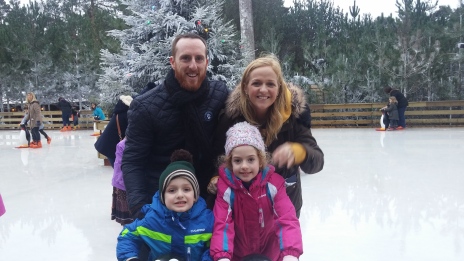 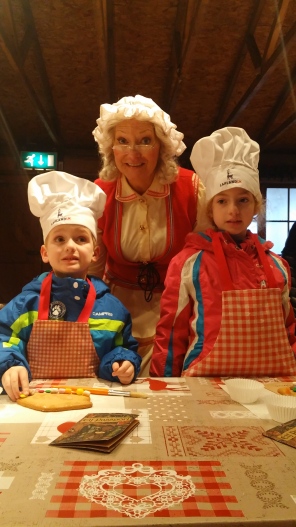 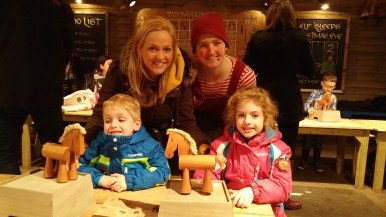 Today was a day for believers and was more magical than I could ever have imagined.  Who would  have thought that just four hours from home we could possibly find ourselves surrounded by snow covered trees, chirpy lively elves, husky dogs, ice skaters and the big man himself, Father Christmas.

Nestled in Whitmore Forest in Ascot is an enchanted forest known as Lapland UK. I’d never heard of it before this year and I’m so glad I could take my two believers to experience such a magical day.

When we arrived, Freya and Rory took their personal invitations over to a smiling elf who checked us in and also had a look to see if Freya and Rory were still on the “good list” thankfully they were so we could continue our journey to meet Santa.

We were led through a snow filled forest to meet two elves who told us how they call children “small folk” and adults “big folk”.  We were then told that whenever we see an elf we must greet them by putting our thumb on our nose and waggle our fingers. The “small folk” were able to climb through miniature doors throughout the day leaving us “big folk” to use the huge doors.

Our first stop was to help the elves in the toy factory and put the heart in the toy reindeer and legs on a wooden horse.  Freya and Rory listened intently to the elves instructions as they sat on a wooden table in the workshop.  We all sang an elf song together then it was time to meet Mrs Claus in her kitchen to get some cooking tips.

Mrs Claus told us that Father Christmas loves pancakes and honey and just like granddad has porridge for breakfast. Freya has decided that this year we should surprise Father Christmas with gingerbread instead of a mince pie which Tim and I are very happy with too.

After Freya and Rory had decorated their gingerbread house and listened to a story and a song from some more lively elves we were then escorted into Lapland village where there was a lovely sweety shop, a festive café, a poky post office, a rocking horse shop and an ice skating rink.  One of the elves that we met who was called Cloud told us that on Christmas Eve when Santa’s away delivering toys they all have so much fun in the village having a snowball fight.

Freya loves ice skating so was desperate to get on the rink as soon as she saw it.  We had a fabulous time skating around and I managed to stay upright the entire time despite a few close calls.  Tim on the other hand had a bit of a tumble on Freya but thankfully were both fine.  Tim was racing around like he was a stand in for Torville or should that be Dean – I’m not too sure which one is which??

After our ice skating experience we just had time to hand in our skates, rush over to the café and enjoy delicious meatballs and chips smothered in a gravy that was just like the dish in Ikea although the elves meatballs were not as nice as Ikea’s – sorry.

Wherever you looked there were chirpy friendly elves greeting you and telling you their adventures it truly was an amazing experience and the surroundings in the Forest were stunning.

As the always over cautious mum I’d dressed Freya and Rory in their ski suits – Rory looked like he was in motor biking gear but I was pleased they were warm. We made a quick stop at the post office to write an extra letter to Santa.  Rory wrote to Santa to say what a good boy he’s been this year and Freya wrote a beautiful letter to thank him for inviting her to his kingdom and to tell him how much she’d enjoyed ice skating and meeting all the elves.

For each of the activities we gave Freya and Rory a Lapland Jingle which is the currency in Whtimore Forest.  The exchange rate was thankfully very good today and was 1 Jingle to 1 pound.  When we reached the sweety shop they both had 3 jingles to spend on sweets which they were very pleased with and overstuffed their cup with as many sweets as they possibly could.

At 3.00 we met our tour guide elf who told us to follow the path through the forest which will lead to Santa’s log cabin.  We wandered through the windy road and met Santa’s reindeer although we couldn’t work out which one was Rudolph.  I wondered whether his nose is red all the time or just at night time?  When we reached a big log cabin one of the elves told us to take a seat and to wait for Freya and Rory’s name to be called out.  In no time at all we were whisked away to meet Santa.  The four of us were so excited and when we opened the door to Santa’s cabin Freya and Rory were in awe.  We’ve never seen them so star struck and quiet.  Santa was just as friendly and caring as we’d all imagined and told Freya and Rory how proud of them he was and how well Freya did with her reading in the Carol Concert and Rory as a traveller in the Nativity play.  He also told them that although he was going to be leaving them toys on Christmas eve he also had a special gift for them for helping him out today.  Freya couldn’t believe it when they were both handed their very own husky dog toy which I’m sure they’ll treasure forever.

I’d kept the trip a secret from Freya, Rory and Tim for weeks and when the time came to hand them their personal invitations I was so excited yet nervous in case it didn’t live up to our expectations.  It really was a fantastic experience and I can’t recommend it highly enough for all believers – big and small folk alike.

The whole day ran like clockwork and was very well organised and whilst there were a lot of people there you really didn’t feel over crowded or rushed in any way.

We stayed at the Hilton hotel in Bracknell which is just a short 10 minute drive away – hotel was lovely and we even managed to squeeze in a quick dip in the pool before heading over to Lapland that morning.  The other highlight of our stay was the waffle making machine at breakfast.

2 thoughts on “Lapping it up in Lapland UK – surrounded by husky dogs, elves and Christmas magic”