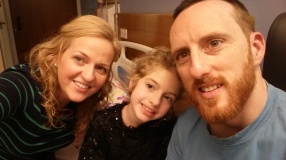 So my eight year old daughter Freya had to have her adenoids out and a t-tube fitted in her ear the other day.  She’s had ongoing problems with her right ear over the years so we’re hoping this will help.  Being such a worry wart the forty minutes that Freya was under General Anaesthetic felt like an eternity, I found myself staring at the clock and just willing the time to go faster..

She was much braver than me and was cheery right up until the operation.  We bought her a mood ring which she absolutely loves and it was purple even when she was lay on the hospital bed which told her that she was excited – although if truth be known I think she was more excited about the fact that she was going to get time off school.  The mood ring that should change colour to reflect the wearer’s mood is still purple 4 days later so either Freya is just always excited or Claire’s Accessories have sold us a faulty ring L

Thankfully the operation was a success and Dr Rothera was pleased with how it went, we’ve now just got to wait and see if her hearing in her right ear improves but I’ve never been so pleased to get  her home.

After the operation Freya was just itching her nose constantly and pointing to her throat which apparently is the normal reaction – the itching is because of the anaesthetic and the medication and the throat is understandably sore for a few days.  The operations was at Spire Hospital in Whaley Range and everyone was absolutely fantastic.  Freya’s nurse was called Free and is a lovely lady from the Caribbean and France.  Just before we left the next day Free gave Freya a little teddy elephant that she’s named Spire and a bravery certificate which she can’t wait to take into school.

I’ve definitely got my aversion and fear of hospitals from mum but after this experience I do feel slightly more positive but saying that I don’t want to go back in a hurry.  There really is no place like home.