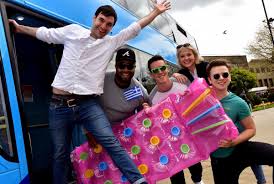 If you love musicals and fancy watching a show that will keep you on your toes quite literally then head over to The Octagon Theatre in Bolton for the musical sensation that is “Summer Holiday”.

The show started at Bolton Bus Station that has completely been transformed since I was a teenager rushing to catch the bus with my brother and sister. I still can’t believe we used to get a train and a bus to school everyday, but we did have lots of giggles along the way…

The show started with some fantastic powerful singing about how a group of Bolton bus drivers were going to convert a bus and travel to Europe.  Before you knew it we were all ushered onto a double decker bus singing “We’re all going on a summer holiday”.  Unfortunately, the bus didn’t take us to Niece or the Maldives but Bolton Town Hall steps.

As the bus drove in front of the Town Hall we saw a red mini cooper with three people who looked like they were arguing about the fact that they’d broken down, if it hadn’t been for their outfits I could have easily thought we’d stumbled onto a domestic.  By the time we’d got off the bus the three actors broke into song and ended up joining the rest of the crew on their Summer Holiday which continued back on stage at the Octagon.

It was such a novelty watching the play in all the different locations and when we got back into the theatre setting the play came alive with all the staging, lighting and acoustics which were all fantastic.

The standard of music and acting was exceptional and how they all just picked up one instrument after another was brilliant.  At the end of the show there was a standing ovation and some of the audience were even dancing with the cast on the stage.

It’s definitely a feel good show and if you’re lucky enough to get tickets I’m sure you’ll enjoy it. I’m even considering going again and taking my children this time.